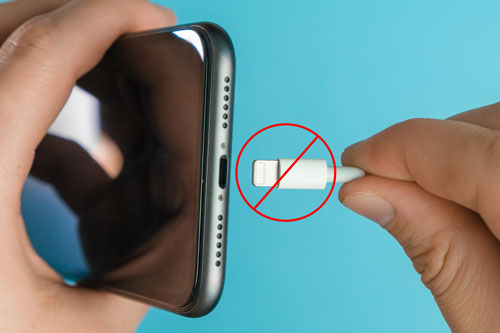 Before you pick up your pitchfork, here me out. There was a rumor floating around that Apple was considering removing the Lightning port altogether and that is NOT what I’m proposing here. I actually think there are times where using the physical port is better/faster than doing things wirelessly. We can certainly debate this at another time.

Especially on their “Pro” products. Why? Because they’ve already done it on all their other pro products. The iPad Pro dumped the Lightning port in favor of USB-C back in October 2018 and the world didn’t suddenly come to an end. As a matter of fact it opened up the iPad Pro to bigger selection peripherals such as USB-C docks, hubs, hard drives, etc. that I enjoy every time I use it.

Apple switched the MacBook Pros over to USB-C/Thunderbolt back in October 2016 and while there was a little uproar over this change, people don’t think twice about it now. Most NEW USB peripherals come with USB-C connections

Imagine only having to carry one kind of USB cable and knowing that you could use it to connect to or charge all of your devices. How sweet would that be? For the first time in tech history we’re almost there. The iPhone is the only device that I need to carry a “special” cable for.

OK yes there is one downside

The one downside is that you would also have to get all new cables or adapters for your existing peripherals. Guess what? This isn’t the first time that we’ve been through this with iPhone. For those old enough to remember the original iPod/iPhone USB connection was a proprietary 30 pin connector. Apple made the switch from the old 30 pin connector to the current Lightning connector. Yes, we had to get adapters, new cables or new devices that supported Lightning. To this day I still see iHome radios in hotel rooms with the old 30 pin dock. (Yes there is an adapter).

The user benefit for making this switch was that you would now be able to plug in a cable to the bottom of your iPhone and not worry about if it was facing front or backwards. It doesn’t matter with Lightning because it’s reversible. You can plug it in either way and it works. This connector was also way smaller than the older 30 pin connector. Lastly it could support USB 3.0 speeds. Great! It was a pain and cost some money to switch out all my cables, but well worth the change.

This would be the only downside to switching to USB-C. You might have to spend some money on cables, adapters or even new peripherals. Guess what? It would be worth it! This time it would be switching to a universal standard that is not just an “Apple cable”. There are a slew of USB-C devices and cables out there since newer Android phones and Windows laptops use USB-C too. It would also likely mean new, less expensive devices being brought to market since peripheral makers would only have to focus on one connection, finally! Also USB-C offers the same advantage that Lightning brought in that the connection is reversible. There is no front or back to the connector. Just plug it in.

Apple has never hesitated before to make bold moves

Switching the MacBook Pro to all USB-C/Thunderbolt 3 ports back in 2016 was a bold move that I’m sure pissed off a lot of customers. Apple didn’t seem to let that stop them. Every MacBook Pro and MacBook that has been released since then has only included USB-C/Thunderbolt 3/4 ports. Every new Mac sold today has this port. You need to connect something older? Get an adapter! So why hold back now? Apple already sells a USB-C to Lightning cable. Not to mention a slew of 3rd party options.

I’m hoping they are not trying to bypass this transition completely by simply eliminating that port altogether (in favor of 100% wireless) as there is still a use for a physical connector. True, I wireless charge more than I plug in. But when I need to plug in, I have to reach for a lightning cable and that’s getting old in 2021. Reaching for a MagSafe cable is even worse!

I’ve not heard any rumors that the iPhone 13 Pro will be USB-C. This is more wishful thinking! USB-C is the way to go for all things USB going forward. We finally have a USB connection standard that’s in use by all major companies including Apple. It’s time for the iPhone to make this transition too, especially the Pro models.