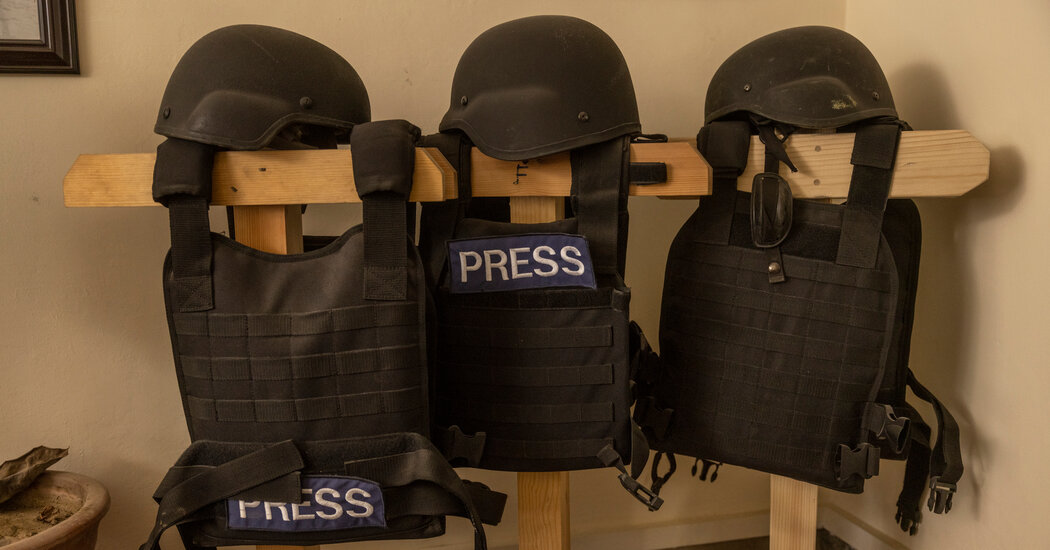 Times Insider explains who we are and what we do, and delivers behind-the-scenes insights into how our journalism comes together.

KABUL, Afghanistan — When the Taliban are in your bedroom and there’s a photograph of you on the wall holding an American flag, a rifle and dressed like a recruiting commercial for the Marines, you have to keep it together.

Then there’s the kitschy mug on your desk that you picked up from a shop just as Bagram Air Base closed in July. It reads, “Been there…done that/Operation Enduring Freedom.”

And the empty beer can in your trash that you drank the night before Kabul fell in August when you had a feeling this might be the last beer you drink in Afghanistan for awhile because the insurgents-turned-rulers don’t take kindly to booze.

And that photo of you in uniform? Taken just before the largest operation against the Taliban of the American war in Afghanistan, when you were a Marine in Helmand Province more than a decade ago. That was when the insurgents were shadows in the opposite tree line, but now, in October, they’re feet away, standing next to your bed, separated by a decade and a lost war.

But the Taliban aren’t here to take anything or kill you, even though they had plenty of chances to do just that when you deployed in 2008, and in 2009. Or when you were a journalist in the country years afterward.

But they still managed to kill some guys in your unit and blew others in half, something not lost on you as they pick up and put back a memorial bracelet engraved with the names of your friends (Josh, Matt and Brandon) and a line from a John McCrae poem: “We lived, felt dawn, saw sunset glow.”

These Talibs insist they’re here to make sure nothing has been stolen from what was once the New York Times Kabul bureau, and that everything is right where we left it when all of the newspaper’s staff members fled the country, like thousands of other Afghans and foreigners did, in August as the Afghan government collapsed.

And everything is right where I left it. There’s the new Xbox I bought at Dubai International Airport when I flew back into Afghanistan in late July, just about two weeks before Kabul fell, thinking that Kabul wouldn’t fall and that I’d have plenty of time to play Microsoft Flight Simulator. My dirty laundry is in the hamper. My bed is made. There is a thin layer of dust on everything.

This is the reality now: the end of the war and the new beginning of the Islamic Emirate.

The most distinct and reoccurring reminders of the long U.S. presence are the black American-supplied rifles now cradled by Taliban at checkpoints and on amusement rides and slung on the back of their motorbikes. The familiar and intrusive thunder of the helicopters flying into the U.S. Embassy is no more, because the U.S. Embassy is no more, and the surrounding Green Zone belongs to the Taliban.

The Green Zone, or international zone, was blocks of concrete blast walls built around what was once an affluent neighborhood with tree-lined streets, until it was turned into a fortress that connected the American Embassy and NATO’s Resolute Support headquarters and a handful of other diplomatic missions.

Now all that infrastructure is just a skeleton of a 20-year war, lost by the diplomats and soldiers who once lived inside it: a museum to failure.

It’s where The New York Times and other news agencies kept their bureaus, and where I had returned last month to continue coverage of Afghanistan and inspect what had happened to our compound.

It’s where the State Department contractors had a little base with a supposed Starbucks inside. It’s where embassy staff members dared not venture away from because the war was on. It’s where armored cars were abandoned as Westerners scurried onto helicopters, so they could be ferried out of the country as the Taliban entered the city.

The Taliban now do what they please in the Green Zone. They’re investigating the abandoned structures, looking for spies and weapons or anything that could harm them because the people within the Green Zone once did just that, running the war from behind its walls. A blimp with cameras once floated above it, watching everything in the city in color and infrared. At Resolute Support headquarters, American officers authorized airstrikes that killed Taliban and civilians alike.

Why wouldn’t the Taliban search every corner? Look under every desk? To them, it’s almost like the Green Zone is the Dragon King Under the Mountain, something that could turn the war back on if they somehow woke it up.

“Are there military weapons here?” one Talib asks us, standing on the second floor of the Times bureau in a room where the security manager once painted miniature soldiers. He carried a suitcase full of them out of the country as it collapsed.

Understand the Taliban Takeover in Afghanistan

Who are the Taliban? The Taliban arose in 1994 amid the turmoil that came after the withdrawal of Soviet forces from Afghanistan in 1989. They used brutal public punishments, including floggings, amputations and mass executions, to enforce their rules. Here’s more on their origin story and their record as rulers.

Who are the Taliban leaders? These are the top leaders of the Taliban, men who have spent years on the run, in hiding, in jail and dodging American drones. Little is known about them or how they plan to govern, including whether they will be as tolerant as they claim to be. One spokesman told The Times that the group wanted to forget its past, but that there would be some restrictions.

No, there are no military weapons.

One Talib points to the body armor on top of a closet. “This is military, no?” he asks in near-perfect English. “Why would you need this?”

We needed the body armor because we were covering the war that just ended, where people killed one another with roadside bombs and artillery and airstrikes and Kalashnikovs. His question is almost obscene, as if the violence his band of insurgents and the Western-backed Afghan government and NATO and the United States perpetrated had existed in some parallel universe.

We respond courteously because our new landlords are carrying a lot of weapons with them.

I throw away a club soda that has been sitting on the kitchen table since August. The refrigerator is rancid. The garden is overgrown.

The Taliban walk through the bureau inspecting a home and office frozen at the moment of collapse. On the bed in the room opposite mine is an open suitcase, half-packed, clothes scattered about. In the small newsroom downstairs, the white board that marked the fall of provincial capitals is still there, though in the end, the country fell apart too fast to track.

On the wall is a map of the city of Kunduz and where the Taliban front lines once were, with the insurgents held in check for a few brief weeks by the demoralized and depleted Afghan security forces before they evaporated and the city fell.

Now, in Kabul, the Taliban are driving around in the Afghan military’s trucks and Humvees and armored personnel carriers, and wearing their uniforms.

“Free cars,” one Talib had messaged me days earlier from the front seat of some armored S.U.V. that had belonged to a contracting company or came from an abandoned military motor pool. He then sent a picture of his rifle, also free, with its markings circled: “Property of U.S. Gov. M4 Carbine. Cal 5.56 MM W0207610.”

This is what losing a war looks like. And the Taliban are still in my bedroom.

One looks about the same age I was in that photograph on my wall where I’m standing beside a gigantic and newly unpackaged American flag, holding that rifle and grinning, because I thought then we were going to win the war or turn the tide or kill the guys who are now sifting through my wardrobe, pointing to a pair of sneakers in my closet. The very shoes were the subject of an article we wrote: “In Afghanistan, Follow the White High-Tops and You’ll Find the Taliban.”

He smiles, points and tries them on. 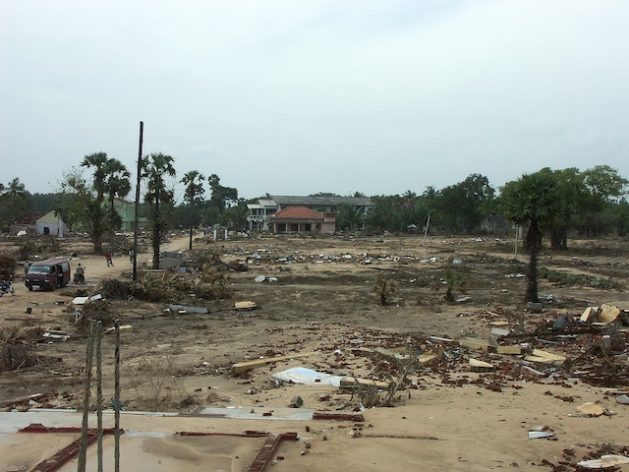 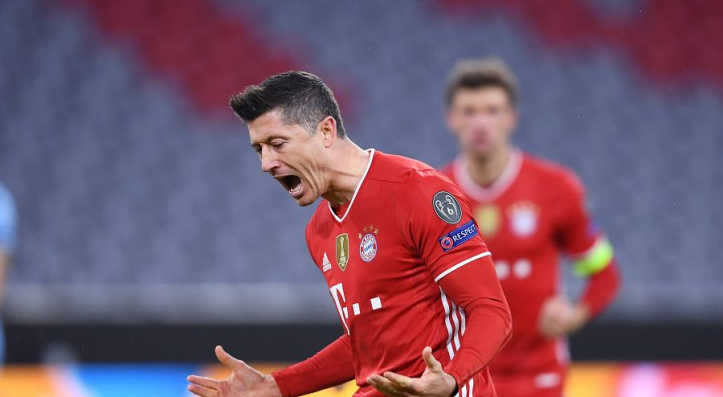