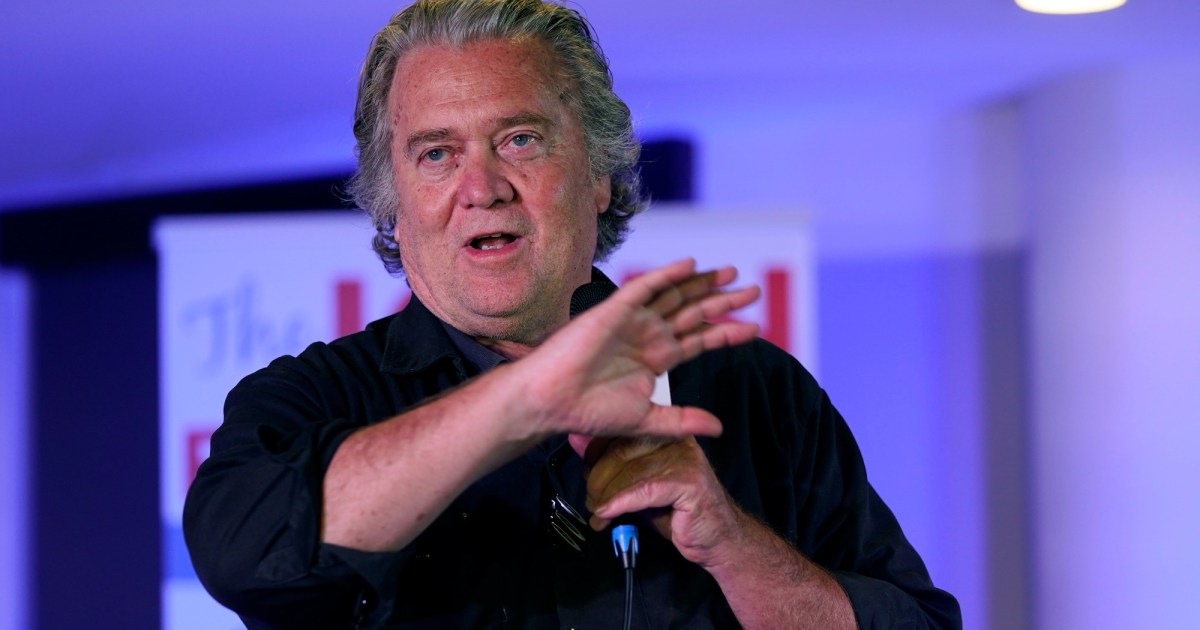 Fight disinformation. Get a daily recap of the facts that matter. Sign up for the free Mother Jones newsletter.

The House of Representatives voted 229-202 on Thursday to hold Steve Bannon in contempt of Congress for refusing to comply with a subpoena from the Select Committee investigating the January 6 attack on the Capitol, raising the question of whether the Justice Department will prosecute Bannon over his action or leave Congress to spend what might be years in court trying to enforce its subpoena. But this legal fight need not obscure the reality that we already know much of what Bannon did—just as we know much of what Donald Trump did.

The January 6 attack was a public event. So was a lot of the preparation for it. In election night remarks and virtually every chance he got, Trump primed his backers for extreme steps by lying about his defeat. Bannon has echoed Trump’s election fraud lies. He also reportedly personally urged Trump to “make a dramatic return” to Washington ahead of January 6 and pledged to “bury Biden.” On his podcast on January 5, Bannon encouraged listeners eager for “revolution” to go to Washington the following day. “All hell is going to break loose tomorrow,” he said.

To be sure, there is plenty the select committee could still reveal. Its members ordered Bannon to turn over documents and submit to a deposition in a bid to find out what led him to make his January 5 prediction and what he discussed with Trump and others. The committee is trying to resolve a big, unanswered question: Did Trump, Bannon, or others plan for extralegal violence on January 6—or just ignore the likelihood it would occur?

Bannon and his attorney did not respond to requests for comment about the committee’s investigation.

So far the evidence suggests that the violence on January 6—including several deaths and about 140 injuries to police—was a mostly unplanned but predictable result of a profoundly irresponsible and antidemocratic effort by the president and his supporters. They used lies to amp up dangerously misinformed diehard Trump fans to pressure Vice President Mike Pence and Congress to help Trump retain power despite losing the election. And they showed little concern that they were making violence likely.

We know that Trump pressured the Justice Department and legislators from key states he lost to declare that voter fraud had thrown their electoral votes into question; that he pressured Pence to assign himself power he did not have and assert that the supposed fraud meant he could block certification of some electors; and pressured GOP lawmakers in the House to use the opportunity to overturn the election results.

Trump called supporters to Washington to amplify that pressure. In his January 6 speech at the Ellipse, he lied to them about election and urged them to “fight like hell” to prevent the election being stolen. He urged them to “march over to the Capitol building.” Trump did tell them to do so “peacefully and patriotically.” But when that march turned violent, he waited  hours to ask his backers to go home.

Bannon late last year sought a pardon from Trump for charges that he defrauded a charity raising private funds to help build Trump’s promised wall along the Mexican border. He received it on January 20, just before Trump left office. While seeking that help, Bannon dutifully supported Trump’s lies about the election and appears to have helped him formulate a plan to contest the result. Bannon’s language on his “War Room” podcast was extreme. He said that Trump would declare victory early on election night, regardless of the actual results. (“He’s going to claim victory. He’s going to set the ground rules.”) Bannon called for “a couple of Horatius at the gate in the first week of December—places like Michigan, Pennsylvania, Georgia,” apparently urging lawmakers in those states to refuse to certify Biden’s wins there. He also suggested that “Stop the Steal” movement showed Trump would stay in office because “we control the streets now.” And he laid out, on the air, plans for Trump to overturn election results.

Bob Woodward and Robert Costa’s book, Peril, recounts, from Bannon’s perspective, a December 30 phone call he had with Trump, then at Mar-a-Lago, in which Bannon urged Trump to “make a dramatic return” to Washington and to focus on January 6 as a “moment of reckoning.”

“If Republicans could cast enough of a shadow on Biden’s victory on January 6, Bannon said, it would be hard for Biden to govern. Millions of Americans would consider him illegitimate,” the book explains. “They would ignore him. They would dismiss him and wait for Trump to run again.”

This Peril quote is one explanation Bannon has offered for his focus on January 6. But as the day approached, he described it not just as an opportunity to undermine Biden’s presidency, but as a chance to stop him from taking office at all.

“We’re now on the cusp of really reversing this, decertifying this, and that is because of you, this audience that has responded to everything,” he said on January 5. “It’s now put us at the point that it’s all converging, and now we’re on, as they say, the point of attack. Right? The point of attack tomorrow. It’s going to kick off; it’s going to be very dramatic.”

The gist of Bannon’s argument that day, as Philip Bump noted in the Washington Post on Wednesday, was that rank-and-file Trump backers could help force Pence and Congress to accept Trump’s election fraud arguments. “We’re on the cusp of victory for only one reason,” Bannon told his audience: “You are woke.”

“It’s not going to happen like you think it’s going to happen,” Bannon also said. “It’s going to be extraordinarily different. And all I can say is: Strap in. Let’s get ready.” He added: “So many people said, ‘Man, if I was in a revolution, I would be in Washington.’ Well, this is your time in history.”

The next day, Bannon joined with other Trump advisers, including Trump’s lawyer, Rudy Giuliani, longtime adviser Roger Stone, spokesperson Jason Miller, conspiracy theorist Russell Ramsland, and John Eastman, the infamous articulator of the legal strategy postulating that Pence could simply declare that Trump won the election. The select committee, citing Woodward and Costa, said the Trump advisers “discussed plans to stop or delay the January 6th counting of the election results and persuade Members of Congress to block the electoral count.”

Since January, Bannon has kept at it, hosting MyPillow guy Mike Lindell and other election fraud conspiracy theorists on his podcast. At an event in New York in June, Bannon declared that Lindell had “proven” that China “did a cyber hack to get rid of Donald J. Trump.” (I was there. Lindell did not prove that.) Bannon has also embraced Lindell’s assertion that the Supreme Court might order Trump restored to the presidency in place of Biden. And Bannon is pressing, with some apparent success, for far-right activists to seek positions as local poll workers and election inspectors, ProPublica reported.

What responsibility actors like Bannon have for the violence on January 6, and for the prospect of similar future incidents, is hard to tease out. You can call it a coup attempt. But it was, more specifically, an effort to use lies and a dangerous mob to subvert a democratic election result. The House has to wait to see if the Justice Department and the courts will force Bannon to comply with its subpoena. But no one needs to wait to judge his actions.