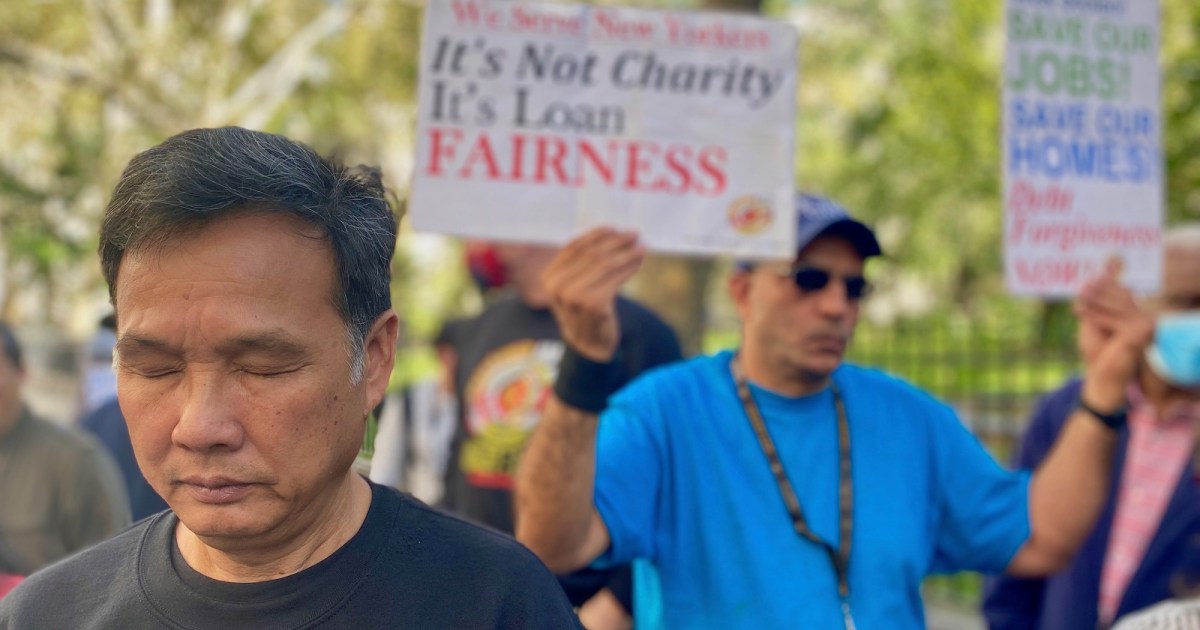 Fight disinformation. Get a daily recap of the facts that matter. Sign up for the free Mother Jones newsletter.

On Wednesday, taxi drivers, local elected officials, and their allies gathered outside New York City Hall to announce the beginning of a hunger strike. They are protesting a plan announced last month by the de Blasio administration to help taxi drivers reduce their debt burdens—a plan that the New York Taxi Workers Alliance, the 21,000-member group leading the hunger strike, considers insultingly inadequate.

As a Pulitzer Prize–winning New York Times investigation established in 2019, lenders, medallion brokers, and city officials spent years taking advantage of a scheme to inflate the prices of the taxi medallions that let New York City drivers operate cabs. The victims were the mostly immigrant cab drivers now left with hundreds of thousands of dollars of debt. There have been three suicides by owner-drivers in recent years.

I spoke with two of the roughly dozen hunger strikers a few minutes after they stopped eating. Zohran Mamdani, who came to New York from Kampala, Uganda, at age seven, wore two pins on his lapel: the red rose of socialism and another reserved for members of the New York state assembly. He has represented a northwest Queens district since January.

Richard Chow: Now medallions are only $75,000. We’ve been underwater for so many years. The city created this crisis.

What are the de Blasio administration and the Taxi & Limousine Commission (TLC) proposing to do about it?

Assemblymember Zohran Mamdani: They have a $65 million plan. It’s one that would provide, for drivers that are eligible, around $20,000. The issue with this plan is that it allows for monthly payments of up to $2,000 a month. It allows for the principal to be up to $330,000. It allows for the conditions of the very crisis it’s supposed to be resolving.

What Richard and the New York Taxi Workers Alliance are calling for, which is what the City Council’s own internal review has called for, is a city-backed guarantee. The reason that the guarantee is so critical is it eliminates risk for the lenders. By eliminating risk, it then incentivizes these lenders to offer terms that are actually affordable. Principals less than $200,000. Monthly payments around $800 a month. Interest rates around 4 to 5 percent.

Right now, what the city is offering is worse than what the market was offering. The power of government is not simply to replicate the market—it is to take on the market. The $65 million would provide a temporary band-aid that within 12 months will be ripped off. Because that’s when the subsidies end, and we will see far more drivers having to choose between the choice of debt or death.

“The power of government is not simply to replicate the market—it is to take on the market.”

What do you normally make after expenses and taxes and maintenance, Richard?

Mamdani: He says it right here. This is on one of our signs. Mayor de Blasio, August 2020: “In terms of some kind of bigger effort…if there’s a change in Washington, I think the notion of potentially getting some kind of bailout becomes a much more real possibility.” Then earlier that same year, the TLC chair said: “My goal is to work with the council and drivers to try to find a solution to reduce driver monthly payments to less than $1,000 a month.” And yet she and he together have put forward a plan that allows for payments up to $2,000.

People who haven’t followed this closely might think Uber and Lyft are 100 percent responsible for this problem. That’s not the full story. What happened?

Mamdani: I used to be one of those people. I used to think that it was Uber and Lyft that drove yellow taxis into the ground, and that they were the true villains. Let’s be clear, they are villains in this story, but they are not the only ones.

In 2001, [then–Mayor Mike] Bloomberg gets into office and has a $3.8 billion shortfall. He identifies taxi medallions as a way to make revenue for the city. The city then makes $855 million off medallion sales, additionally implementing a 5 percent transfer. Then the city sets the opening bid at every auction. The city is artificially inflating the value of these medallions. The city has an internal review that says the cost of the medallion is outstripping the actual value because for decades the medallions cost around $200,000. No change in the market and now it’s four to five times the worth? It’s completely nonsensical.

“The city created a bubble, then Uber and Lyft came in. We couldn’t survive. That’s why my brother committed suicide.”

As all of this is happening, they also let Lyft and Uber come in with no regulations. The worth of these medallions is predicated on the fact that there is a closed market. Uber and Lyft are only allowed to be villains because the city let them. It’s the culpability of the city again and again and again.

How did you and your brother Kenny’s income change once Uber and Lyft entered the picture?

Chow: Kenny, me, all the drivers, our incomes were dropping by like 40 or 50 percent. My brother’s loan was $3,600 a month. The city created a bubble, then Uber and Lyft came in. We couldn’t survive. That’s why my brother committed suicide.

What else is should people to know?

The city actively marketed these medallions to these individuals. Native born New Yorkers were not buying medallions in the same way they used to. The fact that these are 94 percent immigrant drivers—many of whom are not fluent in the language of the English bureaucracy, and also are looked at by so many elected officials as a political constituency that cannot create consequence—allowed it to get to this point.

What led up to today’s hunger strike in terms of the response you got from the de Blasio administration?

Mamdani: The Taxi Workers Alliance has been protesting for years. Richard has been on the front lines for years. The lead-up to this moment is that the city proposed the $65 million. The city was saying that so much of their action is predicated on federal money. They receive that money and everyone has a sense of optimism as to what is now possible, given their own words. You hear, “City puts $65 million towards debt relief.” It sounds like a good story. But the drivers knew from the jump that this was a betrayal of what was promised.

So since then, we’ve been organizing. We’ve gotten to the point where we have Majority Leader Chuck Schumer calling vocally for the city backed guarantee.

WATCH: I rode with @NYTWA cabbie Richard Chow and ally to taxi workers @ZohranKMamdani to highlight the horrific medallion debt crisis and the need for better solutions from @NYCtaxi.

Wanton lending and a lack of oversight created this crisis. We must make it right. pic.twitter.com/6mepG32Tv8

We have done all the due diligence of building a large coalition. This is the 32nd day of being outside City Hall. I have been communicating with the mayor’s team for weeks, asking for a meeting with the mayor. The mayor has refused us at every single point.

I overheard you saying, Richard, that you have high blood pressure and diabetes. Are you worried for your own health?

Chow: We don’t have a choice. I went to see my doctor to get medication and make sure I could go on hunger strike. I don’t know how long I can stay here. This is our last moment to fight. I’m risking my life so that Mr. de Blasio can save the lives of thousands of medallion owners and their families.

And you’ve said you are going to be here every day. That this is your new office.

Mamdani: I’m going to be on hunger strike for as long as this lasts. It will be debilitating. I have had friends who were on hunger strike in the excluded workers fight. I was speaking last night with Marcela Mitaynes, the assemblywoman who was here earlier. She was telling me, “You know, after three days, you can’t take the train on your own. You can’t walk around on your own. You have to have someone with you because you won’t be in control of your body in the way you’re accustomed to.”

And yet, what I will go through pales in comparison to what Richard is going to go through and what so many other of the drivers are going to go through. I’m 30 years old. I’m in relatively good health. The face of this hunger strike are people who have ruined their bodies for the city. Sitting in a chair for up to 16 hours a day. Developing all sorts of complications from the fact that they sit for that long. The fact that they do not have bathrooms that are available for them to use. The fact that they are forever trying to find any kind of parking just to get lunch, to get dinner. They are denying themselves basic aspects of dignified living in the pursuit of the American dream. For some drivers, after 10 years, others 20 years, 30 years, they’re now going to do this? It’s really heartbreaking.