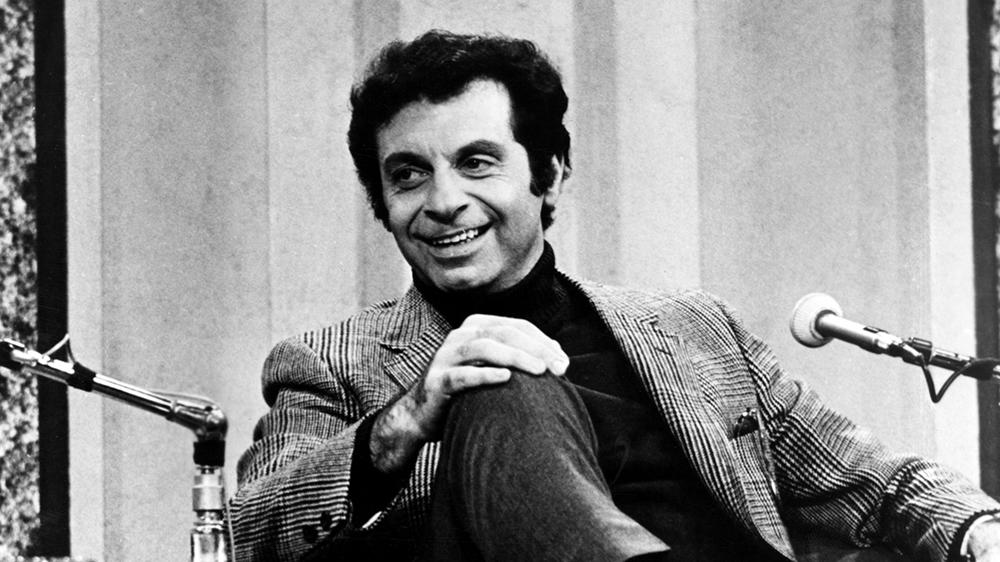 The New York Times confirmed his death with his friend, Lucy Mercer.

In 1953, when Sahl first appeared at the Hungry i, a San Francisco folk singer’s hangout, he was an unknown with little stage experience. But his rapid-fire monologues about politics, social trends and fads quickly earned him the nickname “Rebel Without a Pause.”

“The three great geniuses of the period were Nichols and May, Jonathan Winters and Mort Sahl,” Woody Allen told New York magazine in 2008. Allen credited Sahl’s intellectual brand of humor for getting him into comedy. “He was the best thing I ever saw,” Allen said in another interview. “He totally restructured comedy. He changed the rhythm of the jokes.”

In 2011, his live 1955 recording “Mort Sahl at Sunset” was cited as the first standup comedy album and named by the Library of Congress to the National Recording Registry. Sahl placed 40th on Comedy Central’s list of the 100 greatest standup comedians of all time, revealed in a 2005 special.

Sahl’s fame began to soar when he co-hosted the Academy Awards show in 1959 (the same year he hosted the inaugural Grammy Awards ceremony). In 1960, he appeared on the cover of Time; two months later, the New Yorker published a profile of him called “The Fury.” Sahl wrote jokes for President John F. Kennedy and was a ubiquitous guest on television shows; hosts Steve Allen, Jerry Lewis and Merv Griffin were big fans. He even had small roles in films, including 1963’s “Johnny Cool” and 1967’s Tony Curtis vehicle “Don’t Make Waves.”

But it was as a standup comedian that Sahl made a lasting mark. Unlike his colleague and pal Lenny Bruce, he worked clean and didn’t do drugs. Sahl’s graduate student look — unkempt hair, V-neck sweater, slacks and loafers — was new to comedy. A folded newspaper locked under his arm became his trademark. As if thinking aloud, he talked about relevant events. Instead of drawing big laughs in the style of a Catskills comic, he held audiences rapt with the force of his personality.

After Kennedy’s assassination, Sahl began reading from the Warren Report onstage; he was soon labeled a conspiracy kook, and he didn’t have much of a standup career from 1966 to 1976 except for appearances on college campuses. Sahl said he was blacklisted from TV.

Throughout his career, Sahl frequently provoked his audience. Everyone was fair game. He went after Joseph McCarthy and the blacklist, Eisenhower and even Kennedy, whom he admired. The politically skeptical comic once declared, “Democrats are the left wing of the Republican party. Do you want vanilla or French vanilla?” Another time he said: “Liberals feel unworthy of their possessions. Conservatives feel they deserve everything they’ve stolen.”

He was unyielding, even in old age. In 2011, the 84-year-old Sahl began his show at a Mill Valley, Calif., club before a pro-Obama crowd with the line, “No, he can’t.” He continued performing near his Mill Valley home

“If you were the last man on earth,” Sahl told an interviewer, “I’d have to oppose you. That’s my job.”

Morton Lyon Sahl was born in Montreal. The family moved to Los Angeles when he was 7, and Sahl graduated from USC in 1950. After a brief attempt at graduate school, he tried breaking into comedy in L.A., calling himself “Cal Southern.” Dressed in a suit and tie, he did impersonations.

“Mort thought he should be rural and folksy, but that only lasted about five minutes,” said Robert Weide, writer-director of the 1989 HBO documentary “Mort Sahl: The Loyal Opposition.”

In 1970, he co-starred in the “Love and the Singles Apartment” episode of “Love, American Style.” In the 1982 TV movie “Inside the Third Reich” (ABC),based on Albert Speer’s book, Sahl played Werner Finck, a German comedian whose 1930s cabaret act was critical of the Nazis. He played Uncle Mort in 1984 feature comedy “Nothing Lasts Forever” and an interviewer in the 1987 TV movie “Jonathan Winters: On the Ledge.” Sahl appeared as himself in the docs “Sam Peckinpah: Man of Iron” (1993) and “Looking for Lenny” (2011).

The Daily News called Sahl’s 1987 one-man show — his return to Broadway after 30 years — “not so much an evening of yocks as it is an evening of reality, and that’s almost as scary as it is hilarious.”

In 2008-09, he was writer-in residence at Claremont McKenna College, where he taught courses on politics, critical thinking and screenwriting.

In his 1976 quasi-memoir “Heartland,” Sahl, who by that time had lost most of his audience, struck a hopeful note: “I went to the cover of Time magazine without ever leaving the city of San Francisco, and I did it by having a one-night-club platform. If you have a place to stand, you can move the world.”

He was married and divorced four times, and is not survived by any immediate family members. His son with model China Lee, Mort Jr., died in 1996 of a drug overdose.