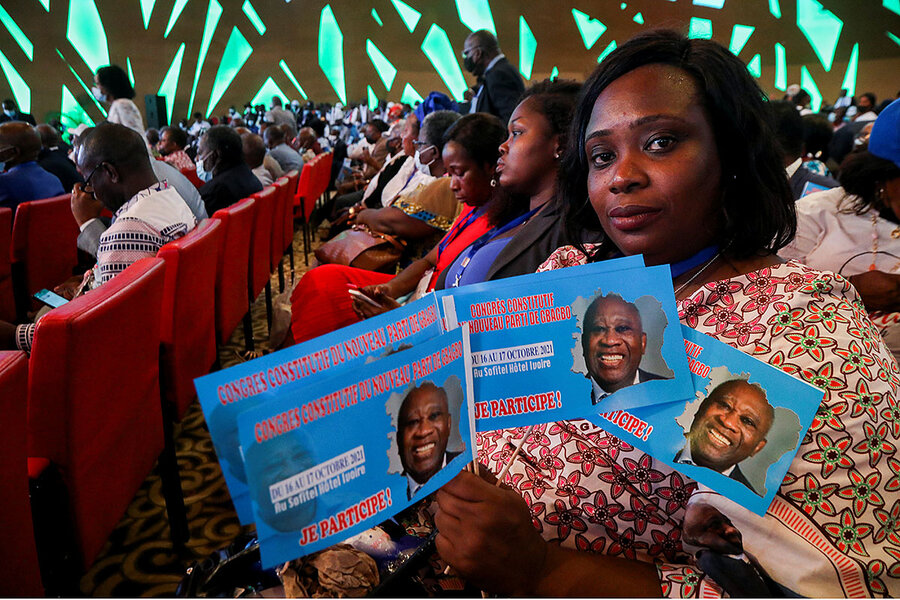 In 2010, former Ivory Coast President Laurent Gbagbo refused to step down after losing the election. He declared himself president, triggering a constitutional crisis and a conflict between his supporters and those of his opponent, Alassane Ouattara, which divided the country along ethnic and religious lines.

At least 3,000 people were killed in the war that ended with Mr. Gbagbo’s defeat in April 2011 and his transfer to the International Criminal Court in The Hague.

Why We Wrote This

The return of Ivory Coast’s disgraced ex-President Laurent Gbagbo has stirred division among survivors of the violence surrounding his fall in 2011. We ask how fragile is the current peace process.

In the decade since, the West African country has stabilized. Thousands of victims were compensated under a government that enacted political reforms and honored the victims of the bloodshed. The Ivoirian economy improved as cocoa sales boomed.

Now Mr. Gbagbo is back. And he recently set up a new political party, suggesting he’s planning a comeback.

Already the peace was fragile for this West African nation, with a justice scheme announced under President Ouattara deemed one-sided. Many still await reparations. How Ivoirians navigate this chapter will have implications for peace and political stability ahead.

A decade after post-election violence tore Ivory Coast apart, Mamadou Coulibaly has rebuilt his life by focusing on survivors like himself. His organization compiled the names and stories of thousands of citizens caught up in the 2010-11 conflict, which ended in the defeat and extradition of a disgraced former president.

Since then, the West African country has stabilized. Thousands of victims were compensated under a government that enacted political reforms and honored the victims of the bloodshed. The Ivoirian economy improved as cocoa sales boomed.

Now the former president, Laurent Gbagbo, is back.

Why We Wrote This

The return of Ivory Coast’s disgraced ex-President Laurent Gbagbo has stirred division among survivors of the violence surrounding his fall in 2011. We ask how fragile is the current peace process.

And that has survivors like Mr. Coulibaly, who runs the National Federation of Victims of the Crisis in Cote d’Ivoire, or Fénavipelci, reflecting on how much work is left to be done.

For Mr. Coulibaly, true peace can only be achieved when political leaders like Mr. Gbagbo publicly take responsibility for their actions and apologize to victims like him.

“I prefer the truth be told about who did what,” Mr. Coulibaly says. “We could do a public plea for mercy in front of Ivoirians or between ourselves. And then we’ll forgive one another.”

So far, that hasn’t happened. And Mr. Gbagbo recently set up a new political party, suggesting he’s planning a comeback.

In 2010, Mr. Gbagbo had refused to step down after losing an election. He declared himself president, triggering a constitutional crisis and a conflict between his supporters and those of his opponent, Alassane Ouattara, that divided the country along ethnic and religious lines. Mr. Gbagbo is from the country’s south; Mr. Ouattarra is a northerner with roots in neighboring Burkina Faso.

At least 3,000 people were killed in the war that ended with Mr. Gbagbo’s defeat in April 2011 and his transfer to the International Criminal Court in The Hague.

So when he landed in Abidjan, the Ivoirian capital, in July, to the cheers of his supporters, he had been out of the country for almost a decade. He was the first former head of state to be put on trial at the International Criminal Court, which acquitted him in April for crimes against humanity; he had won an earlier case in 2019 that went to an appeal.

In Abobo, the neighborhood in Abidjan where Mr. Coulibaly lived, the conflict was devastating. Both pro-Gbagbo and pro-Ouattara forces carried out mass executions, torture, and sexual abuse. He had to flee.

“For someone like me who had a family to pass through that kind of situation, we began asking ourselves if we shall get out of this bad situation,” Mr. Coulibaly says. “It’s God that wanted us to be alive.”

After Mr. Ouattara took power, he got to work on building peace. A truth and reconciliation program, known as CDVR, was formed in 2014, along with a state-sponsored program for inter-tribal dialogue.

President Ouattara also announced initial funding for reparations. Of a list of more than 700,000 people who applied for the money, the government approved around one-third. Eligible families received about $1,800 for every relative who died, and those who suffered injuries received $260. Nearly 5,000 people have actually received money, according to Mr. Coulibaly. But it’s unclear whether the reparations fund will be replenished so that others can be paid.

Critics say the reparation and justice process is one-sided. Despite recommendations from the CDVR, most of President Ouattara’s associates were spared jail sentences.

The consensus is that the president couldn’t risk putting his own associates on trial and have their atrocities revealed.

Although the government approved for reparations to be extended to 317,000 victims, analysts say that process, too, has been flawed with many victims omitted.

“The reparations process was a mess,” says Kouame Remi Oussou, a sociology professor at the Alassane Ouattara University, a public university named after the current president. “It was corrupt and perceived to favor one tribe. If you wanted to get compensation as a victim, you had to pay the people in charge. It’s difficult to reconcile in this type of condition.”

Feeling that justice was only half done, Mr. Coulibaly has continued his work. Survivors in his network have tried to find common ground, share their pain, and advocate for more government action, including a formal, public apology. They’ve tried to make peace, he says, by reconciling tribal and political differences on a personal level.

The parties that people supported, as well as the tribes they came from, determined whether they would live or die during the war, he says. Those tensions sometimes play out today in daily life.

“People have accepted their fates,” Mr. Coulibaly says. “I try to sensitize them on the need to return to their normal lives as before.”

Saye Awa, the manager at Fénavipelci, says members regularly go door to door, preaching reconciliation and peace in order to avoid another conflict. When possible, they bring disputing members of different tribes and parties together to talk and settle quarrels.

While government efforts to achieve peace and justice have been criticized, a more practical peace, analysts say, could emerge from the informal one-on-one meetings that Mr. Coulibaly and others like him have facilitated.

Still, despite criticism, President Ouattara’s government has been largely willing to settle the score with his rivals. Many of Mr. Gbagbo’s associates who were accused of ordering the killings during the war have been freed prematurely.

In 2017 Mr. Gbagbo’s wife was acquitted of crimes against humanity by local courts, and Ivory Coast has refused to transfer her to the ICC to face war crime charges.

Two years later, Mr. Ouattara invited his former rival to return after his first acquittal by the international court.

“I am happy to see you,” President Ouattara said after the two finally met and hugged in July. “The past events have been painful. Too many died and we must try to put that behind us.”

Ivoirian courts sentenced Mr. Gbagbo in absentia to 20 years in jail for stealing state funds during the crisis. In theory, he faces arrest and imprisonment for this conviction.

For his part, Mr. Coulibaly welcomed the reunion of the two former foes, saying it could mean a wider peace for Ivory Coast. “I am happy to see them reconcile,” he says.

While he knows some victims will resist, he’s convinced that putting Mr. Gbagbo on trial at home would only cause more fighting as the former president still has a large following.

“We dare to believe that the truth will come out one day so that everyone will know their responsibilities. … If we were to point fingers, everyone would be implicated,” he adds, referring to the accusations against Mr. Ouattara’s forces.

Mr. Gbagbo has said he would meet with victims of the conflict he incited but didn’t say when.

Still, many questioned his return and asked what the 2010-11 war meant as videos circulated on social media of the two men hugging.

In July, Issiaka Diaby, the leader of another survivor’s association, joined protests in Abidjan to call for the arrest of the former president on his return.

“Laurent Gbagbo, for some victims’ communities, is like a wolf that has been chased away from the sheepfold and is now coming back,” Mr. Diaby told RFI, the French broadcaster.

Eyeing the next election

While the calls for Mr. Gbagbo’s arrest were loudest with his return in July, they have since quietened. It’s unclear if the government either wants to jail Mr. Gbagbo or arrange a pardon.

In October, the former president formed a new political party, and he’s likely to either run or play kingmaker in elections due in 2025.

Some analysts say the apparent detente between Mr. Ouattara and Mr. Gbagbo belies bad blood that could plunge the country into another crisis if nationwide reconciliation isn’t addressed more seriously.

“You may feel like nothing is going on,” Professor Oussou says. “But one morning, everything goes poof! It’s a fragile peace.”

Get the Monitor Stories you care about delivered to your inbox.

That shaky peace was tested in 2020 after Mr. Ouattara won a controversial third term. He had promised not to run in 2016 when a new constitution was adopted. But last year, the country’s constitutional council ruled that the new reforms reset Mr. Ouattara’s terms and allowed him to contest. Riots broke out in protest, leaving 85 dead. Professor Oussou warns the same could happen in 2025.

In the meantime, Mr. Coulibaly says victims expect public apologies from both leaders and an official commemoration of the 2010-11 killings. “All the high authorities are responsible for what happened to Ivory Coast,” he says. “We are all responsible. Let us just forgive one another and move on.”